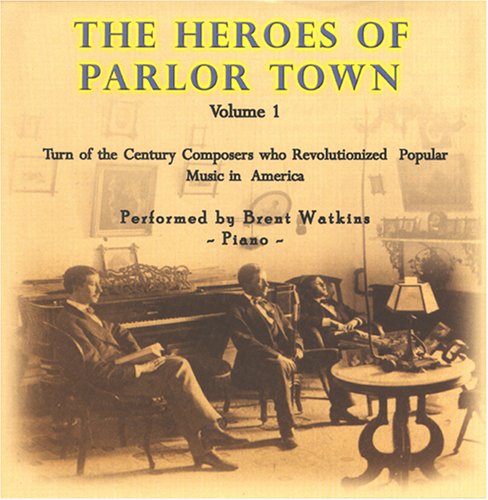 The Parlor. Americas "entertainment center" from 1880 to 1920. Before TV, before radio - when a piano and sheet music opened the world to new sounds and new composers.

Who were the heroes of Parlor Town? Men of color who defined musical culture for white America. Men who challenged racist stereotypes by creating some of the most sophisticated and eclectic music the world has ever heard.. White composers who valued and were influenced by these men.

When our Heroes came.the music of America was forever changed.

"Watkins plays with a great sense of the ragtime and stride styles..." -- The Mississippi Rag, June 2005

Brent Watkins has studied piano since the age of 8. Trained in the classics, as a young teenager, Brent fell in love with ragtime piano in the early 70s, when music from the motion picture "The Sting" was played on a local radio station.

Acquiring a substantial collection of piano and ensemble ragtime recordings and sheet music, Brent expanded his repertoire and became eager to share his new found love of the music.

He began his piano career by performing at the 2nd Annual Sedalia Ragtime Festival in 1975 while only 13. At age 15, he studied at the University Of Missouri Conservatory Of Music in Kansas City. He had the privilege to meet and study with renowned second generation ragtime composer Bill Krenz, who retired in Brents hometown of Cedar Rapids, Iowa.

Although discouraged from pursuing ragtime and jazz piano by his classical University piano instructors, Brent continued to perform in coffee houses and restaurants in Kansas City, Missouri through the early 1980s.

Throughout his life, Brent has been passionate in his study of African American history and culture, with a special focus on the years between 1890 and 1930.

Now Brent Watkins is a frequent performer of ragtime and vintage jazz music, appearing at music regional music festivals and presenting "The Heroes of Parlor Town" at museums and cultural centers throughout the Midwest.